At Christmas I was given a $50 Dymocks gift voucher, so last week in my lunch break I trundled down to the Rundle Mall store with a mission to spend it. I'd been holding off for a little while, mainly because I already have a huge pile of unread books on my shelf, but in the end the book-buying itch got the better of me and off I went.

There were a couple of books I definitely wanted to buy. The first was Obernewtyn by Isobelle Carmody, which I haven't been able to find before, mainly because I was always looking in the adult section when it turns out it's a children's book (who would have thought?). The second was the first in John Flanagan's Brotherband series. I found both, but I still had enough cash on the voucher to buy a third. And there wasn't really anything else I had on my wish-list, so I found myself in the unusual situation of being able to browse the fantasy shelves to see if anything caught my eye. As I did so I thought about what I was doing, and I found the whole experience quite enlightening. Here's what I observed.

1) Covers made a difference.

Never mind the old adage. If I didn't like the cover of a book, or more importantly, if the cover of the book didn't suggest the contents would be something I would be interested in, or if the cover looked samish (ie it featured a man in a black cloak and hood), I didn't bother picking it up. Irrational, perhaps, but that's what happened.

2) Back cover blurbs don't make a lot of difference.

If the cover attracted me I read the back. But I have to say it wasn't as much a deal-breaker as the front cover. To me, book blurbs tend to be a bit like trailers for movies or adverts on the radio. They use a lot of emotive and ethereal terms in an attempt to draw the reader in, but they're usually not that indicative of the 'feel' of the book itself. I don't think I read a single back-cover blurb that either put me off the book in my hand or made me more desperate to read it.

In fairness though, it was probably because I'd never heard of the authors blurbing the books I was picking up. Had Terry Pratchett or Eoin Colfer or Ursulua Le Guin said "oh my god this book was so cool I couldn't stop reading it, it was awesome!" I would have taken note, but unless I was familiar with the blurber's own books they didn't mean very much at all.

4) First words make the most difference of all.

Once I read the back cover blurb, the next place I went was the first paragraph. And I reckon this was the most important part of the whole process. Those first words tell you so much -- they tell you if the voice of the author appeals to you or not, they give you a feel for the overall tone of the story, and if they're written well, they immediately pique your insterest so before you know it you've ended up reading the first chapter instead of just the first few lines.

5) Random lines are the clincher.

Having read the first few lines, and if they appealed to me, my next step was to open a page at random and read another few lines, then maybe do the same thing a couple more times. This was really an extension of what I did in step 4 -- just another way of checking out the voice and tone of the book. If I liked what I saw, and if all the other important steps had borne fruit, then I was ready to make the tough decision: was I going to spend cold hard cash on a book I knew nothing about by an author I had never heard of?

I did. I bought a book called Jack Cloudie by Stephen Hunt. I've never heard of the author or the book, but I went through all the steps above and it passed with flying colours.

And it made me really think about my own books, sitting on book shelves all over Australia and New Zealand. How many of the above tests would they pass, if someone with a voucher to spend wandered into a store and had a look around? How many people would randomly pick up Ghost of Ping-Ling or Mapmaker's Apprentice and end up buying it, having never before heard of the books or of me? I wonder.

Having said that, during my shopping trip I did of course have a look to see how many copies of my books were still on the shelf. The last time I did that, which was probably about six months ago, there were a few copies of both book 1 and book 2. This time there was only a single copy of book 1. Were they sold, or were they returned? I'll probably never know, but I really hope it was the first. And if it was the first, I really hope the people who bought them enjoyed them, and they felt they were rewarded for taking a risk on a new and undiscovered (and still slightly bewildered) author such as myself. It's safe and easy to stick with the authors we know, but sometimes taking a risk can really pay off. You never know.

I'll let you know if it happened for me when I read Jack Cloudie!

Posted by Peter Cooper at 4:13 PM No comments: 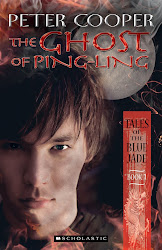 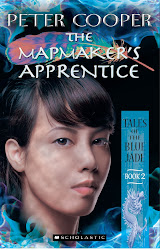 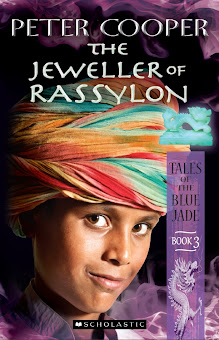